When the Greeks are Marketed to 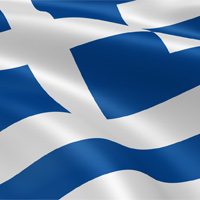 Now, I may be completely wrong, this is all conjecture of course as I am no expert in the economy for sure.

Recently I have been made aware of the awful crash of a country I loved like a lover, like a sibling or like a child I am not certain which, just it was an unconditional love – that is for sure.

Greece, it seems, had fallen on bad times, it has become debt ridden and bankrupt, it can no longer function and there is a general malaise and public discontent.

As someone who has spent a considerable amount of time in that fair and beautiful land I have some comprehension how this has come about.

Basically, they have been rogered brutally by the Great Powers, not for the first time either. It is a pattern one can see repeated on both macro and individual scale and is a perfect example of the ongoing slave trade these days. On an individual scale the crash of the western economies over the past few years has been down to the same cynical exploitation of greed by the money lending corporations.

In the late 1950’s Karamanlis paved the way for Greece’s entry into the then EEC.

Since then the real West : America, Germany, France, England and China have convinced this poor Balkan state that it too, could and should, be living the Western dream.
Slowly this appeared possible, The Greeks, of course, knew that they were in no way inferior to the rest of the Western countries so they took the bait an waited….and spent

Sure enough it was not long before their way of life was changing, they were soon reaping the rewards of this new way of life.
In 1985 the average Greek drove 0.25 of a car which was 15 years old. By 2005 the stats had changed to 1.5 cars and 2 years old on average. The Greeks had also become accustomed to a steady increase their ‘standard of living’, mobile phones were widespread, laptops, newer automobiles, new cocktails, German air conditioning, French Wine, English steel, Chinese gadgets, American clothes ….. they had made it, and all because they had answered the simple question :

“why don’t you live like us?”
well the trouble is that there is one simple answer ~
“they can’t afford to!”

You see, this lifestyle we are so busy selling the world costs money, we can afford some sort of facsimile of the lifestyle because it is actually a representation of the lifestyle we have created ourselves…our temperate climate and historical progress has allowed us to create a way of living rich in the very goods we have invented..to some extent….

Not so for the rest of the workd, not so for most of the world, all we will do to them is sucker them into chasing our dreams and saddle with a vast consumer debt…

Greece is now in financial ruin because it tried to ape some ethereal soap opera lifestyle which maybe does not even exist, and certainly if it does, proffers far less in terms if humanity and joy than the languid and happy lives they had before this katanalotic (consumerist) idiocy started them up.