It was never going to be easy choosing between the Samsung Omnia and the HTC Touch Diamond to replace my Nokia N95 but in the end I was swayed by the Omnia’s larger screen, higher onboard memory ( 16gig ) and DivX playback facility. I kind of knew at the time of ordering that I preferred the Touch Diamond, it looked more sturdy and compact, more professional. My sister Jessie had though had a recent Samsung model which had impressed me at its build and usabilty pushing me towards this brand for the first time ever. 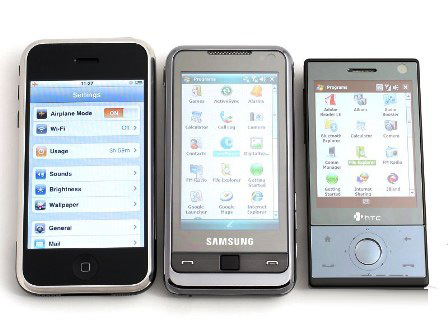 I received it and was pretty pleased with its initial appearance and functionality, I had used windows mobiles before and hadn’t really likes the operating systems, but Windows Mobile 6.1 seemed pretty featured.

With 16gig I was naturally going to fill it with a decent bit of music and it was playable via Windows Media for Mobile or Touch Player – neither was really that quick to use without stylus though.

my main gripe, though, is based upon connectivity. The Nokia N95 had a standard 3.5mm audio jack plug, a standard usb port and a simple power socket for charging. This made it easy to use, easy to charge and easy to synch. The samsung Omnia has decided to use the single port for all interfacing. This means that you HAVE to have the correct leads upon you always and also that you are unable to charge the phone and acces the audio output simultaneously.

I was saddened to discover that the mobile phone had no inbuilt satellite navigation system nor mapping software – unlike the Nokia N95 – and spent a long while trying to find a suitable GPS Mappping software for it. In the end ) after relying on Google maps with GPS for a while I managed to install Route 66 but had to go about strange methods (Port Splitter ) to allow the Navigational Software to run from an internal GPS.

My first Omnia stopped working after 6 hours and the second ( current ) one does seem to go into some sort of deep sleep occasionally which means that only a battery removal and reinsertion will allow a reboot.

I see the recently released Nokia N96 and do lust after it a bit, they are so well made, so easy to use and so compatible with ganes and software. I am amazed that I have not yet managed to find any interesting software for Windows Mobile 6.1 nor games for the Samsung Omnia. With the N95 or even the Palm OS Treo I found an abundance of plugins and software to keep my relationship fresh.

Locking the phone is a c*nt as well. Which makes me jealous of the apple mobile telephone which has that nifty lock thing.

Everyone these days seems to be buying the iPhone, I wont ever, they all look stupidly smug, like somehow they have caught “cool” off their phones.