The Nokia Lumia range is an ever-expanding family of Windows Phone handsets created by this famed Finnish manufacturer. There are currently two distinct Lumia models on offer, with more in the pipeline to be launched later in the year.

The Lumia 800 is the flagship handset which was built to show off Nokia`s fine attention to aesthetic detail along with Microsoft`s impressive Windows Phone platform. From a hardware perspective you get a 1.4GHz single core processor, an eight megapixel camera and around 16GB of onboard storage space to use as you see fit. The Lumia 800 benefits from its premium grade polycarbon shell, which is hard wearing and also available in a variety of colours. Around the front you get a 3.7 inch AMOLED screen which is very easy on the eye and pumps out rich colours and deep blacks at all times.

The Lumia 710 is Nokia`s more affordable entry in this range. While its display is the same size as the Lumia 800`s at 3.7 inches, it uses more typical LCD technology rather than the high end AMOLED system which is present on the costlier model. Thankfully it shares the same 1.4GHz processor as the Lumia 800 and so there is no notable performance difference between the two. 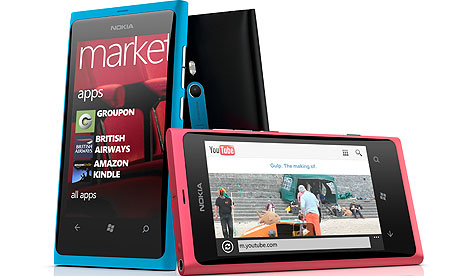 Nokia has harked back to its former use of removable covers to allow Lumia 710 users the option of swapping out the battery back plate for one of a different colour. This means you can reinvent the look and feel of the phone to a certain degree and helps it appeal to a younger audience.

As the Windows Phone experience on offer is consistent across the Lumia range it is worth considering as a whole. Version 7.5 of Microsoft`s mobile operating system is preinstalled and it brings with it plenty of perks.

The first comes in the form of full social networking integration. Facebook is tightly linked with almost every aspect of the phone, so you can easily add all of your contacts as soon as you sign in with your account. You can also share pictures, videos and your thoughts direct to your profile without firing up the dedicated Facebook application. Microsoft recently made it easier for Twitter fans to achieve the same levels of functionality, so it really is easy to socialise with a Nokia Lumia handset.

Windows Phone is respected thanks to its web browsing experience, which is delivered via a scaled-down version of Internet Explorer. You also get support for multiple webmail accounts from services like Gmail and Hotmail. The excellent onscreen QWERTY keypad is easy to use and has good autocorrect functionality, which speeds up ty

Xbox Live integration means that you can earn achievements and Gamerscore when you download compatible titles from the Windows Markeplace. You can also see when your friends are online and compare your performance without having to fire up your Xbox 360 console

In all the Nokia Lumia range is as good a reason as any to get cash for mobiles by recycling your old handset so that you can invest in an upgrade.