I have had the Nokia 6500 slide for a while now and it is as I would have expected.
But this has quite annoyed me.
For a start, when I synchronise it with Nokia PC Suite it gives me the option to install Nokia Maps. i would like to, even though the mobile has no GPS functionality it would still be nice to search and look at the maps. Any way that is that really, you cant install them on this.

More annoying is the preinstalled TrafficTV app in the phone. on initial boot it looks like a maps app sort of thing and I played with it for a while, but was worried lest I rack up any data costs. I tried deleting it from the phone in case I started playing with it after a few beers, it wouldn’t let me.
Worse was to come, I called Orange Customer Services yesterday on a separate matter and they told me that I had been signed up for a £4 a month contract to TrafficTv, I had made doubly sure that I had not accepted any terms or conditions to that affect. I am super wary of such things these days.
happily they cancelled this dubious obligation on my part and we parted on good terms. I even took up a free 2 month evenings and weekends data offer so felt quite pleased.
To summarise, watch tgose prebundled applications installed on your new mobile phone. They are throwing a lot of money in development of these devices and need to claw it back by increasing average revenue per user……… Sneaky bunch they are.

OK, please ignore my post of yesterday, or was it the day before I am not sure. I looked at all the hugely featured mobiles available and came to the decision that it was time for something solid and sensible. A bit like the choice of a Nokia 6230 a few years ago.

I phoned Orange, and with little deliberation or consideration opted for the Nokia 6500 Slide in Black. Orange took very little time to dispatch and deliver this lovely little number. It charged up nicely and turned on with a wink and a smile. 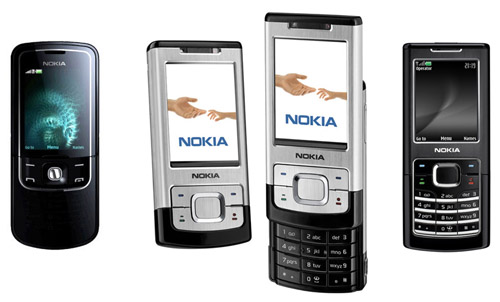 It is fully featured, yet not overdone. Although I am the type to enjoy exploring menu structures ad infinitum I think I had explored the 6500 in a couple of hours. The camera is a 3.2 megapixel Karl Zeiss © lens. and is a joy to use.
I will miss the GPS functionality of the N95 as well as its Wifi Sniffing capabilities, but it is all mine.